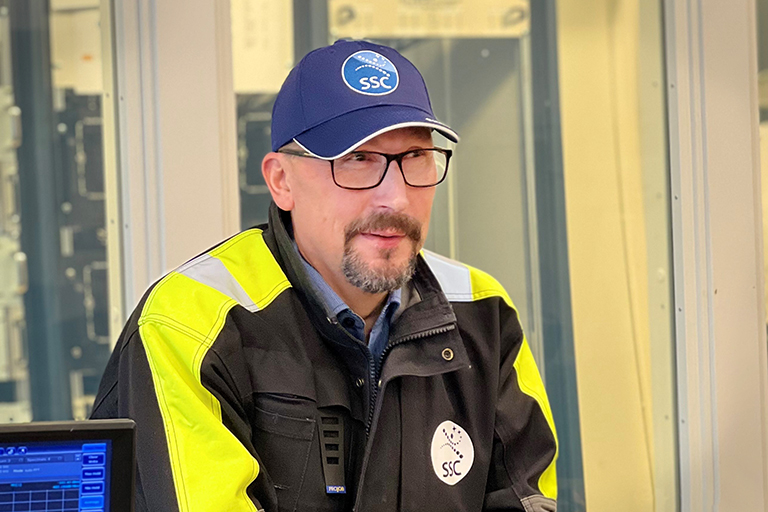 With space as the base for 30 years

Marko Kohberg is one of many employees at SSC and Esrange whose employment stretches back for decades. After many positions within the company, he is today the Rocket and Balloon Operations Manager with around 30 engaged employees.

Since the 1960s, balloons and rockets have been sent into space from Esrange for various reasons, like studying the atmosphere and doing research on, for example, ice crystals, the aurora borealis or materials in microgravity. Esrange is, from an international perspective, a versatile base with several areas of activity. Even so, perhaps the rockets are the most famous today.

In 1989 you started at Esrange. How were things back then?

The space center was a lot smaller then. I started at what we call the radar mountain as a satellite operator. We received data and stored it on magnetic tapes, which we later sent a portion of to a satellite image company for further processing. At that time, we had three antennas. Today we have ten times as many.

At this time, I was about to move south, but since I got a good job I stayed in Kiruna. Here I got involved and learn about the technology and, not least, I meet many people from all over the world. I particularly remember the fantastic training months I did in Japan in the early 1990’s touring the country. Since then, I’ve made many trips to clients around the world.

How come you stayed at Esrange for so long?

Because I continued to develop and did not stagnate. I worked with technology until 2007. After that I have mostly worked with management. What I find stimulating now is being able to develop the staff and myself. We are also moving towards commercialization of space activities globally. That is a big change but at Esrange we are very fast to adapt.

Why work at SSC?

We are like a big family here. Everyone is very passionate about their work. I regard everyone as equally important, regardless of what you do. Each person is seen as an individual and not just a role or function. I think we have competitive wages and benefits and very good food in our restaurant. At Esrange, we also have shorter annual working hours than most workplaces, and we have, among other things, long Christmas leave every year. You get adrenaline rushes every time rocket launches take place. And you get many new foreign friends as well.

What is most exciting, rockets or balloons?

Most people probably think that rockets are cooler. But imagine releasing balloons twice the size of the Stockholm Globe Arena. These launches are complex. At Esrange we are among the biggest players in the world in this field. Our colleagues have a deep and solid competence, and I think the balloons are as exciting as the rocket launches.

But we are also building the ability to do more things at the base, for example launching small satellites, which will be a big thing. Maybe it will become more famous than our balloons and sounding rockets.

Photo: Marko Kohberg in the telemetry station from where the balloons are operated.