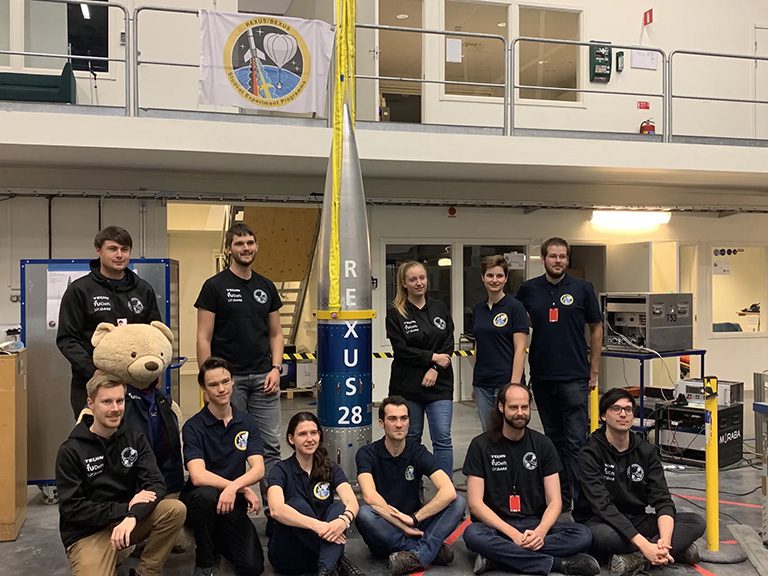 There is an intensive autumn for the rocket and balloon team at Esrange Space Center, Kiruna, Sweden. The last campaign included two rockets in the REXUS/BEXUS programme.

The REXUS/BEXUS programme is realised under a bilateral Agency Agreement between the German Aerospace Center (DLR) and the Swedish National Space Agency (SNSA). The Swedish share of the payload has been made available to students from other European countries through a collaboration with the European Space Agency (ESA). Each year, two stratospheric balloons (BEXUS) and two sounding rockets (REXUS) are launched within the frames of the programme allowing students from European universities to carry out scientific and technological experiments.

REXUS (Rocket Experiments for University Students) is dating back to 1995 when SSC first welcomed students to the base in northernmost Sweden. This morning, and last Saturday, the REXUS 27 and REXUS 28 were launched after 2,5 years of delay, multiple postponements due to the COVID-19 pandemic, the fire at Esrange, and more recently the war in Ukraine.

Despite, multiple delays, most of the teams remained on board and have been launched successfully. In total, 5 experiments:

“This campaign is of course special since it was the first one postponed in 2020 due to the pandemic and was then delayed several times. It has been a long and difficult journey for the students but I would like to highlight the resilience of all the teams that prepared for the bench test and then for this campaign”, says Armelle Frenea-Schmidt, manager for the programme at SSC”, adding:

“It has been a huge pleasure to finally welcome them at Esrange. Both launches had their own operational challenges but thanks to the efforts of all staff involved in the campaign, both rockets have been launched under perfect conditions. At early conclusion of the campaign, we have three fully successful experiments, one experiment under investigation, and a missing free-falling unit from HADES but the team has been able to provide landing coordinates; it is therefore planned to look for it during the next summer”.

All experiments from the last campaign have been recovered. Dig deeper into the different experiments by visiting the official website of the programme! REXUS | Rexus/Bexus (rexusbexus.net)

If you have a chance to go the impact area of Esrange and find an orange capsule with a Swiss flag on the top, contact REXUS/BEXUS!