Every year the German Aerospace Center (DLR) launches a MAPHEUS research rocket with a payload developed and supervised by the Institute of Materials Physics in Space (MP).

The Mobile Rocket Base (MORABA) of Space Operations and Astronaut Training (RB) provides the payload support systems and launch service of the sounding rocket which reaches an altitude of up to 268 km and thus facilitates more than 6.5 minutes of microgravity, before it re-enters the Earth’s atmosphere.

The MAPHEUS 11 rocket in May 2021 consists of a two stage vehicle configuration that carries the nearly 250 kg scientific payload to an altitude of 221 km, providing more than 5 minutes of microgravity for the three experiments onboard. 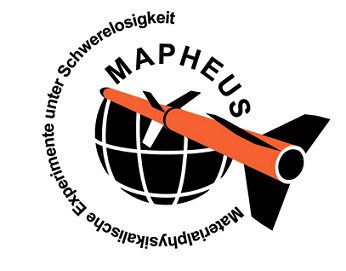 The challenge is to make powder-based additive manufacturing independent of gravitational forces. The planned experiment is a sequel to previous experiments in this research field, during which metal powders were investigated in parabolic flights. Within MARS a part from bulk metallic glass powder ,AMZ4’ will be fully automatedly manufactured. This will be the first attempt to manufacture parts from bulk metallic glass over several minutes in weightlessness and will provide a wealth of scientific data to prepare for even longer microgravity time on orbital platforms in the near future.

Measures diffusion in liquid alloys using x-ray radiography and shear-cell furnace in two different experiments. Heating of furnaces will start prior to countdown, liquidizing the alloys before liftoff

In Somex, a modular experimental environment for microgravity platforms such as MAPHEUS sounding rockets has been developed, consisting of interchangeable soft-matter sample cells that can be combined with different optical instrumentation. In addition, the hatch of the pressure-tight hull, through which the colloidal sample cells are installed during early access, represents a technology demonstrator. Two experiments will be processed on the qualification flight:

The MAPHEUS 11 campaign consists of a two stage vehicle configuration with three German experiments onboard.

Twelve experiments to Space from Sweden

On Wednesday, 23 November, the launch window opens for one of the year’s most anticipated rocket launches at Esrange Space Center, above the Polar Circle in Northern Sweden, after two and a half years of planning and preparation.

There is an intensive autumn for the rocket and balloon team at Esrange Space Center, Kiruna, Sweden. The last campaign included two rockets in the REXUS/BEXUS programme.

MAPHEUS-12 took off according to the plan

MAPHEUS, a recurring campaign at Esrange Space Center outside Kiruna, has launched its 12th rocket.

The TEXUS team is about to launch another sounding rocket from Esrange Space Center. Yesterday, we got some glimpses from the preparation work. Outside are meters of snow. Kiruna and Esrange are experiencing another winter with blizzards, heavy snowfall, and[...]

On Saturday morning, MAPHEUS-9 sounding rocket left Esrange Space Center outside Kiruna, in the chilly arctic north. This marked the eleventh successful launch within the scientific rocket program led by the German Aerospace Center, DLR. The MAPHEUS campaign is an abbreviation[...]

PRESS RELEASE Esrange Space Center in northern Sweden has resumed its rocket activities after the fire that damaged the launch site in late August. Today, only three months after the incident, a sounding rocket was once again launched from the[...]